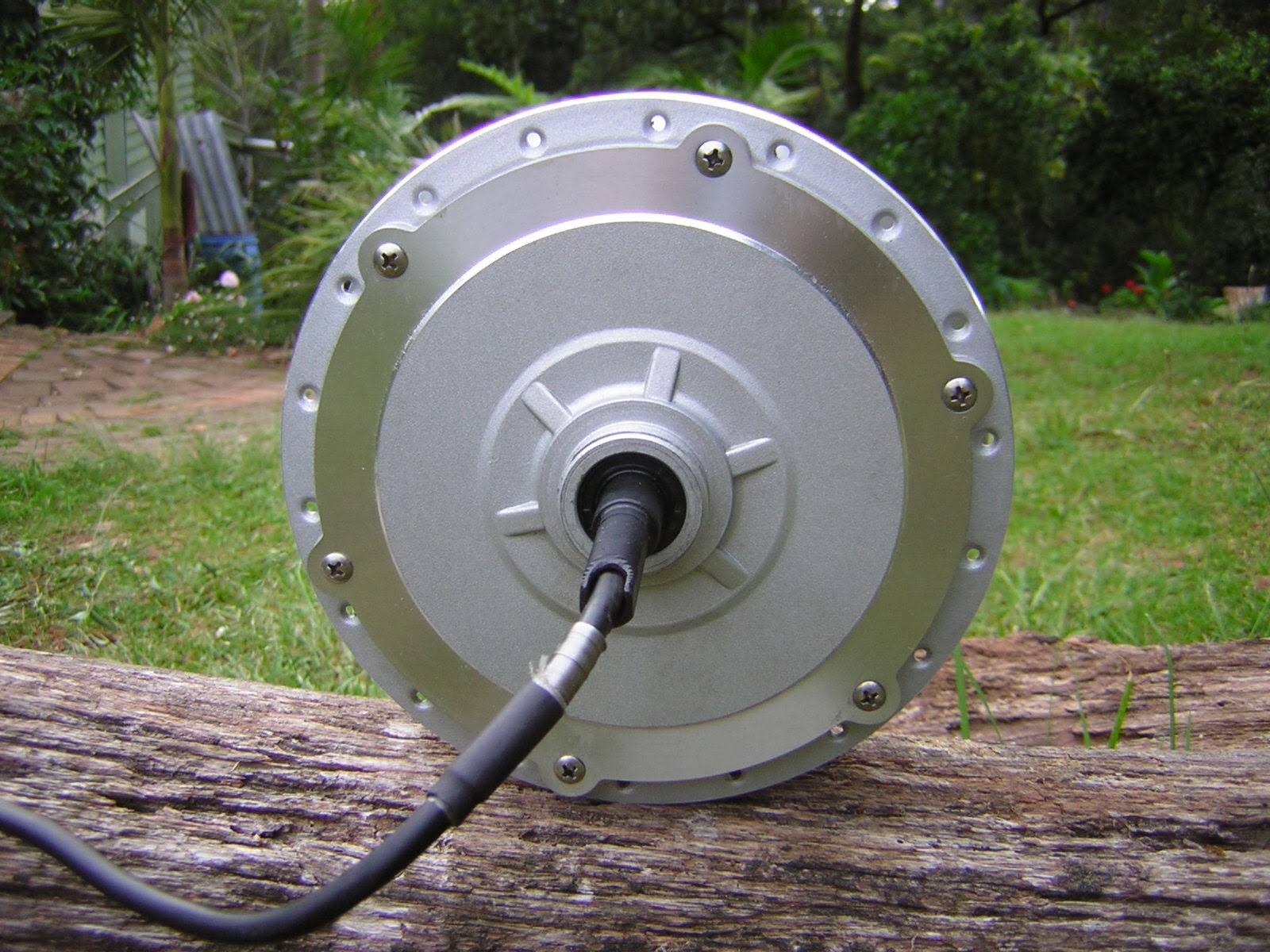 BPM motors are heavy, strong, low cost and durable. However their speeds are unclear and they are marketed with inaccurate ratings.

*maximum speed where motor power can be felt when riding

Most legal hub motors for the European and Australian market are rated at 250w. Bafang/8Fun make a few 250w motors, with SWXK (front hub, disc brake capable) and SWXH (rear hub, disc brake capable) being common. These are good motors for moderate hills and light loads, but if you are hauling big loads and/or climbing steep slopes, something stronger is required. Bafang’s solution is the BPM (my son says this stands for Big Powerful Motor, but I think it’s for Brushless Permanent Magnet). 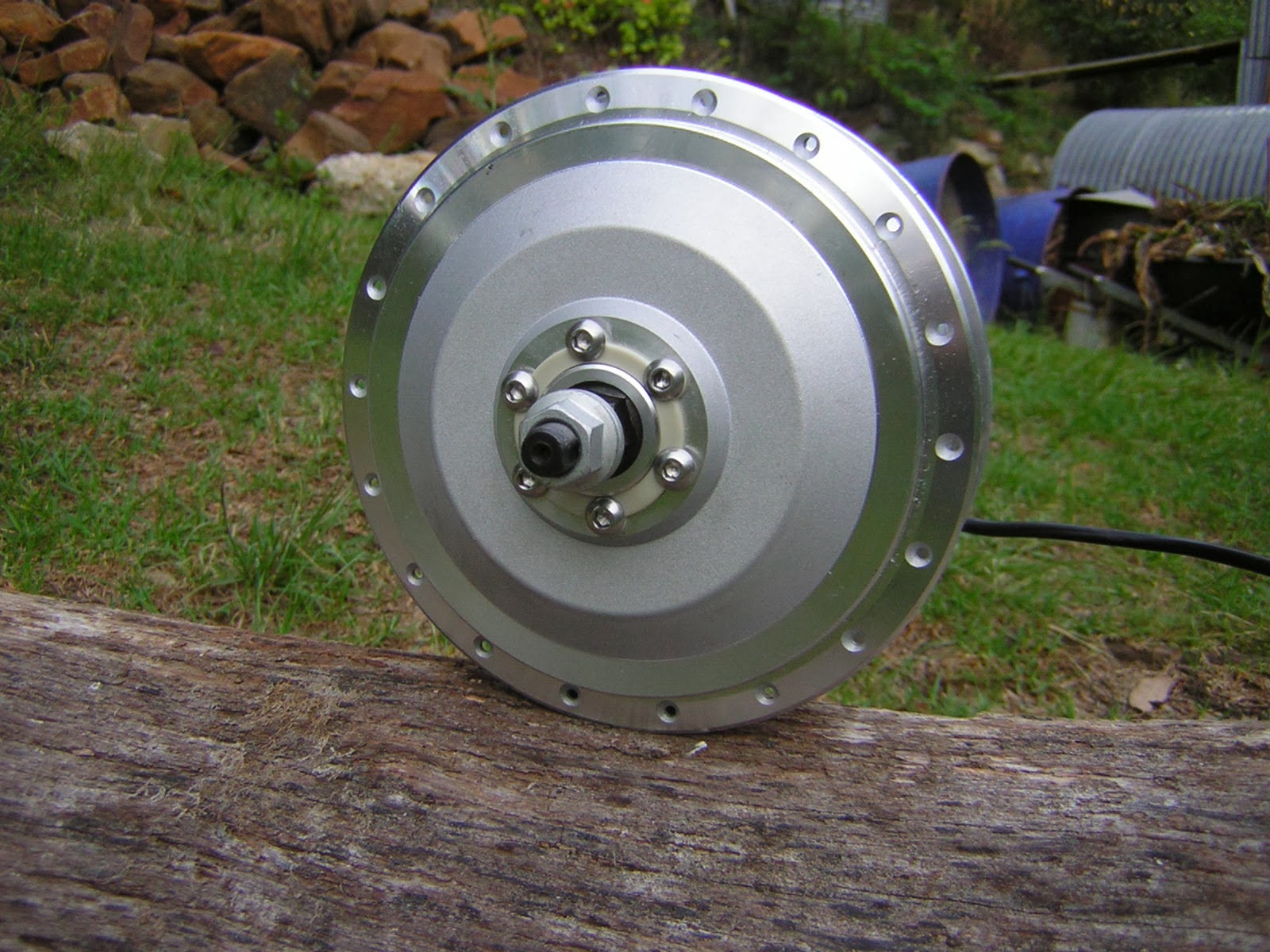 Bafang BPM motors are advertised (by Greenbikekit.com and BMSBattery.com) in 2 powers: 350w and 500w. I’m not sure what the difference is between 350w and 500w motors – I have both in identical settings and I can't see there is a difference. It could just be that the 500w ratings are at 48V, or with higher amperage controllers.
BPMs are also advertised as 36v or 48v motors - again, I’m not sure if there is a difference. Brushless DC motors like these can be expected to spin at a speed proportional to the voltage, so a motor with a 48v controller and battery can be expected to spin at 1/3 faster rate than the same motor at 36V. 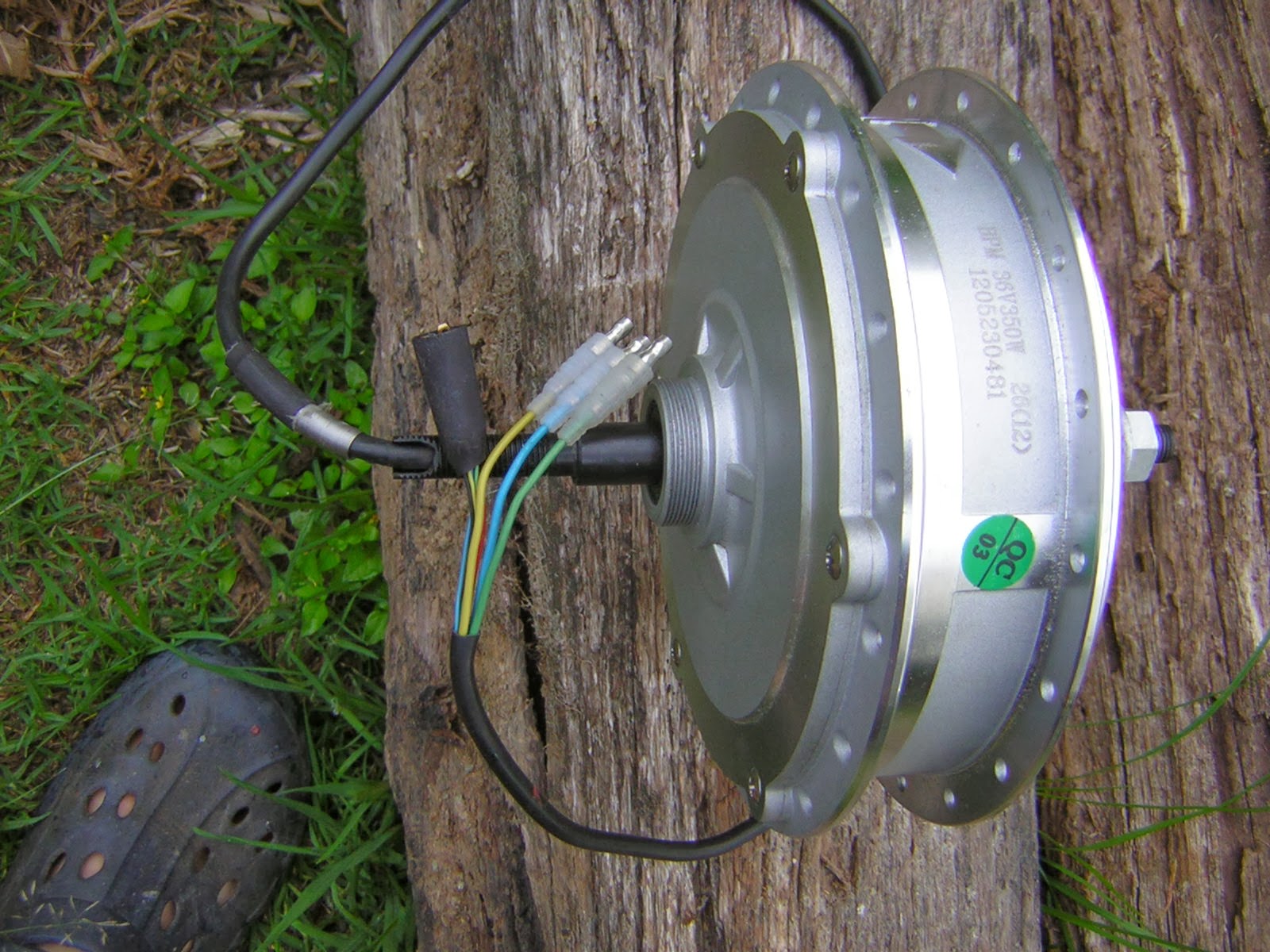 BPMs are also advertised in different speeds. However my experience is that the advertised speed is not always reflective of the measured motor speed.
BPMs are made with a “code” rating. This is claimed (and I believe it, usually) to be the number of turns the winding wires make around each pole in the motor armature (stator). The more turns around each pole, the slower and higher torque the motor will be. Also, the more turns, the thinner the wire or the fewer strands in the bundle, so that the amount of copper in the motor remains roughly the same for different speeds and the same power. Advertised BPM winding codes include 10, 11, 12, 13 and 15. All the BPM motors I've tested have no-load speeds that are in proportion to their labelled code.
Some upright trikes are sold with front BPM hub motors marked as 20(13). These are reported as spinning about 25km/h no load in a 20" wheel. This upsets the idea that the code (in brackets) is the number of turns - but the Australian importer may be asking for different labelling (they are also labelled as 200w - clearly not true).
There is some discussion online of code 8 BPMs, however Greenbikekit.com advise that Bafang will no longer supply these, due to safety and liability concerns.

My first BPM motor was a 36v 350w code 12 motor, which I installed in the back of my Xtracycle cargo bike. It's been very strong and totally reliable for 12,000km so far.
It’s labelled like this: 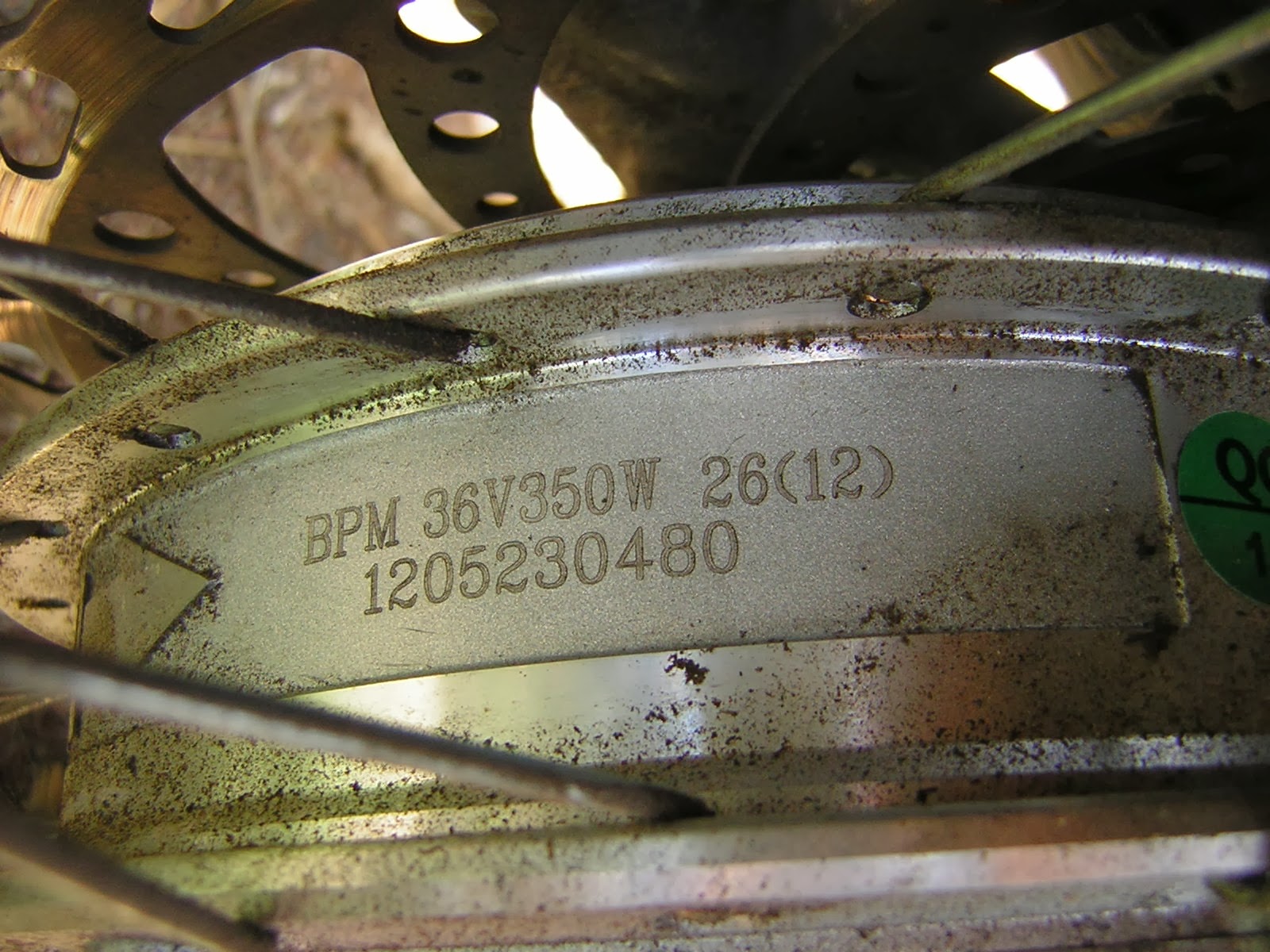 I read the 26 (12) as meaning that it’s designed to be laced to a 26” rim, and has 12 turns of copper windings per pole. The “26” seems to be about right, as laced into a 26” rim (as I have it), the peak speed at which useful power can be felt appears to be just over 25km/h, which is the legal maximum powered speed of an ebike (in Europe and Australia). The motor was advertised as “216rpm” which at 26.8km/h is reasonably close to the peak powered speed. The no load speed is 238rpm which equals 29.5km/h.
This motor is powered by a 36v Headway battery, through a Greenbikekit.com controller sold as: “CON91, 450W36V hub motor controller, 9Mosfets”. This controller draws a maximum current of 18A (usually closer to 17A) and maximum electrical power of about 660w. This is not much more than a 250W “con62” controller which draws 15A and around 500w.
The BPM motor is a little slower than the Bafang 250w SWXH motor, which spins a little faster than 25km/h with a “con62” 250w controller.
There is in reality nothing about a hub motor that fixes it for use with a particular rim diameter. A motor label of 26 is only a suggestion of a 26" rim, and it can be laced into (for example) a 20" rim if you want the speed it will give in that rim.
Compared to the 250w motors, the BPM 350w 26 (12) clearly has a higher torque at low speeds. It is quiet, quieter than a 250w motor, with a lower note. It feels like a 6 cylinder compared to a 4. It works well for me hauling a 30kg child on the back of the Xtracycle up hills of up to 15% gradient – hard work. 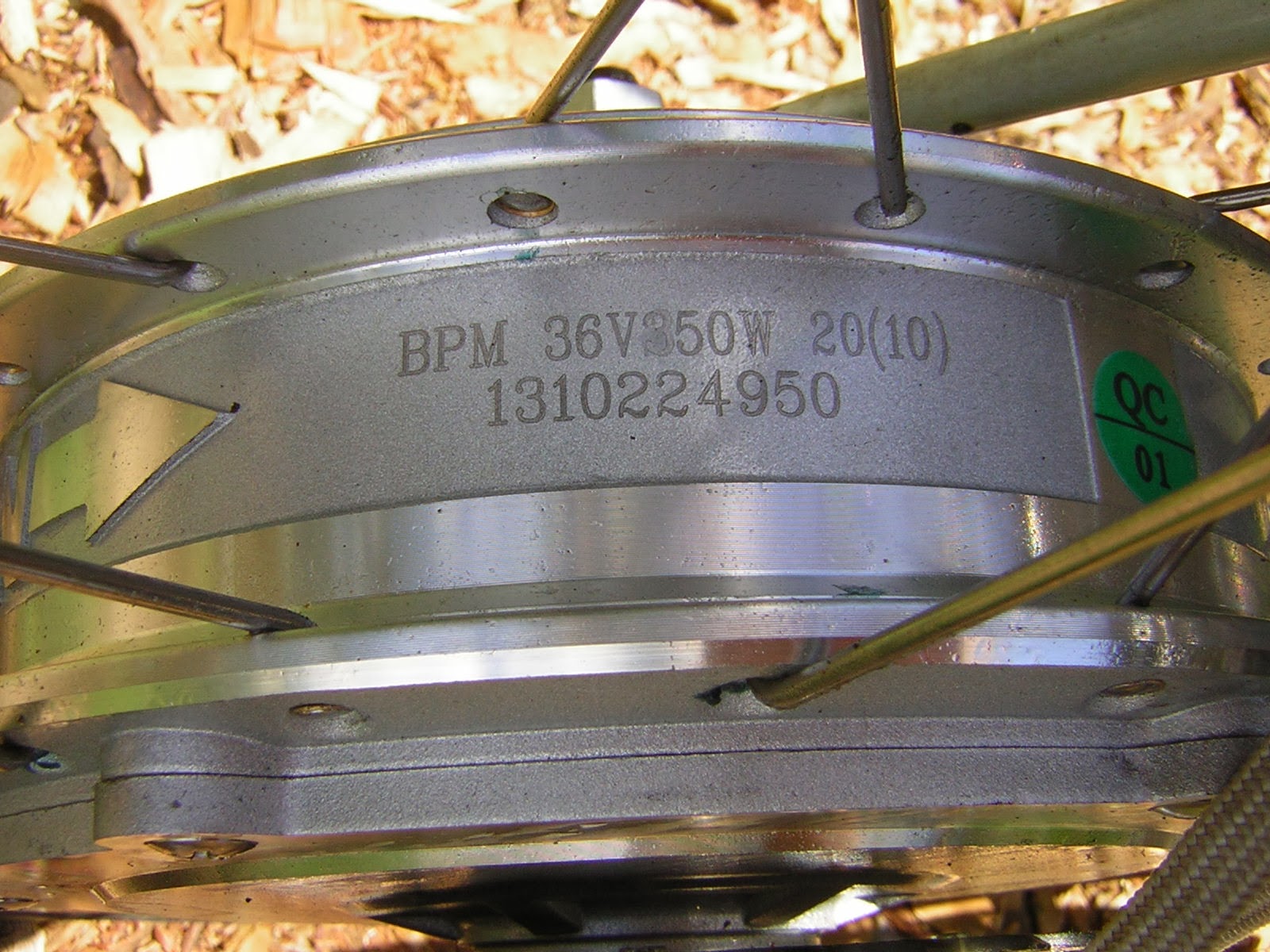 The new design looks stronger, but the older 12mm style is still clearly pretty strong given that I haven't bent one so far.

In lacing a BPM to a 26” rim, I recommend 1-cross lacing. 2-cross puts the spokes at too acute an angle to the rim and causes bends at the nipples. I don’t recommend 0-cross – radial – spoking, as this doesn’t give the spokes a good ability to transmit torque from the hub to the rim.
If you use 2mm spokes (which I do), I recommend using washers on the spoke heads, as the spoke holes in these Bafang hubs are large – 3.2mm diameter. I have a packet of little brass washers for this job (sorry I don’t have a supplier to recommend as these were sent to me from a relative in Germany).
To calculate spoke lengths I use “spocalc express” (from SheldonBrown.com). With this tiny MS Excel spreadsheet you need to do a separate calculation for each side of the wheel. It’s worth calculating both sides for this hub (I admit I often don’t bother to on more symmetrical wheels) as the spoke length difference is about 2mm.

The real test of the BPM’s ability to handle long slow climbs will be to measure the temperature of the windings under load. This is more difficult than testing an SWXK, as the thermocouple wires will need to be fed up the hollow axle with the power and hall sensor wires (perhaps instead of the hall sensor wires). I haven’t yet, but hope to try it before too long.

My main test of the BPM has been the one in my Xtracycle (see my Xtracycle page). This has (early 2019) done 15,000km, without any squeak of trouble, hauling children and stuff up and down the steep, rough hills of our mountain - I reckon this is easily as stressful as 3 times the distance on the flat. I've never tested the motor for temperature - it's not easy to get a wire out - but it faithfully hauls bike, me and load up the long hills without any problems.